If only we had considered storing water underneath the approximately 26,000 synthetic turf football fields in Europe when these fields were installed, the current water crisis many clubs face could have been much different. Take the situation of the Netherlands, for example.

The Netherlands has over 7,000 natural grass and 2,300 synthetic turf football fields, while the number of synthetic turf hockey fields is estimated to be 800. Historically, these systems have been designed to drain water as quickly as possible and to divert it to ponds or channels. However, as this country is increasingly dealing with short periods of heavy precipitation as well as prolonged periods of drought, the official line has now become to harvest water and to it store onsite where possible. Diverting water to ponds or channels has now become a last resort. Storing water onsite relieves the burden on the infrastructure during peak rains and enables clubs to use that water at a later stage when there is a dire need. The importance of this should not be underestimated, as researcher Ruud Bartholomeus of Wageningen University warned late last year. “Sudden downpours after an extended period of drought will not replenish ground water levels immediately, as there is always a delaying effect. In 2018, the Netherlands experienced three dry periods, but in terms of groundwater level, there was one continuous period of drought that year.” The disruptive effect of this on the water balance was enormous. Where Dutch farmers used 20 million cubic metres of groundwater to irrigate their crops in 2017, their demand for water shot up to 150 million cubic metres the following year.

Storage for own use

Sports fields, including many synthetic turf fields, cannot do without water. In their study “Sustainable water use on sports fields,” students from the HAS University of Applied Sciences mapped out the water consumption on Dutch sports fields. They concluded that Dutch football and hockey fields together consume 2,550,000 m3 of water annually. Water consumption by football fields was broken down into 96% groundwater, 3% surface water and 1% potable water. Hockey fields, on the other hand, only use 40% groundwater and 28% surface water. However, these fields require a whopping 32% of potable water. Wim Glaap of Newae believes this should change. “If all synthetic turf hockey fields in the Netherlands were to collect and store water, they could have a storage capacity of more than 2 million cubic metres of water,” he calculates. That is almost the entire water demand for all football and hockey fields combined. “For example, at hockey club Roomburg in Leiden, we placed a permavoid system in a watertight container underneath the field. The 1,200 m3 storage capacity per field is sufficient to irrigate the three synthetic turf water fields all year round.” The entire investment cost about 250,000 euros extra, but, in principle, makes the club completely self-sufficient when it comes to water. It certainly saves the club financially, as one irrigation cycle of a synthetic turf hockey field consumes 5 m3 of water. As the current price for water in the Netherlands is set at EUR 2.60 per cubic metre, this saves the club almost EUR 25 per game. 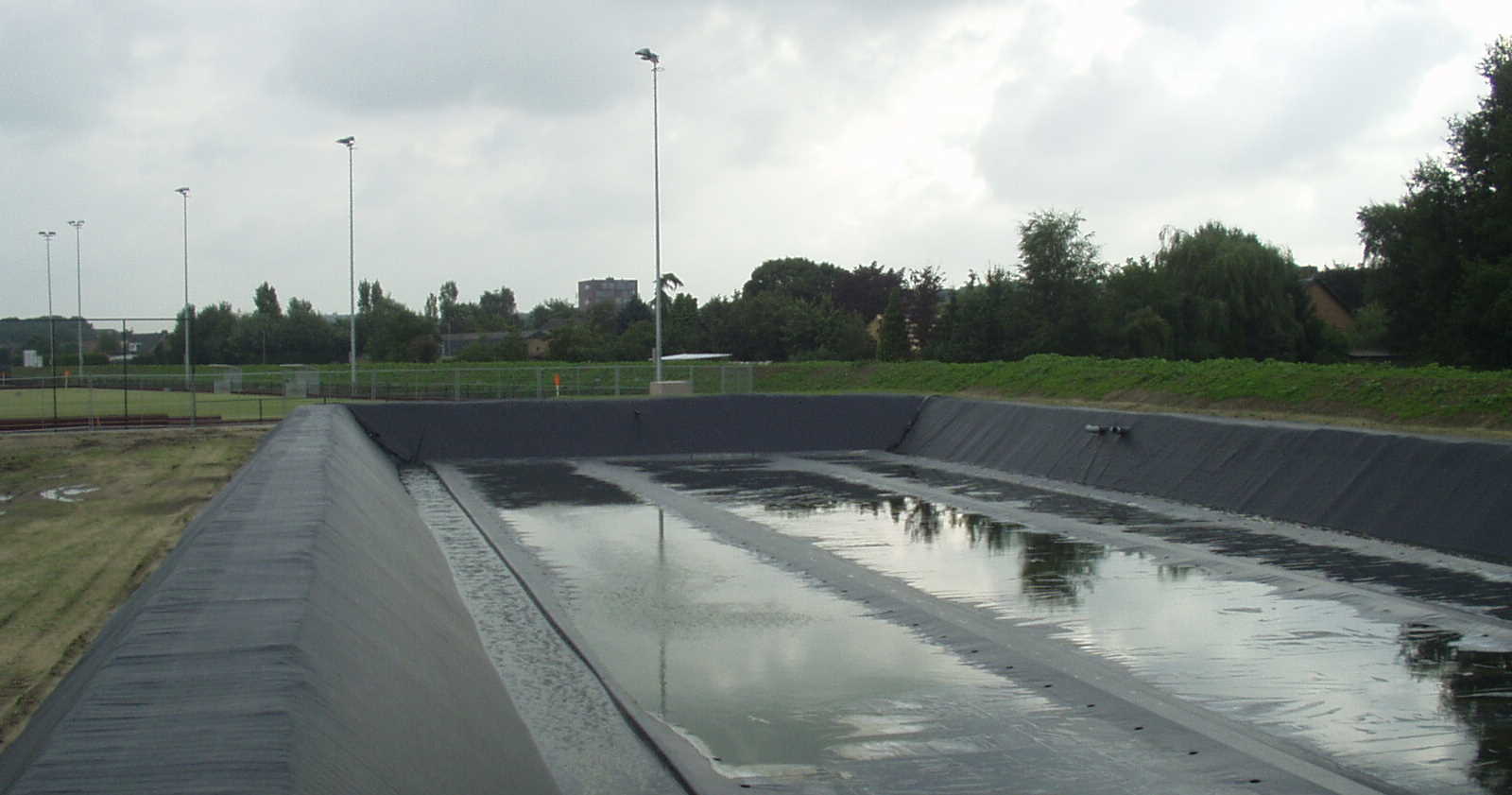 Harvesting water and storing it underneath a field doesn’t come cheap in the Netherlands. Sports governing bodies like the Dutch FA or national hockey federation (KNHB) demand that the entire playing surface consists of the same structure. “Using a crate system allows you to temporarily store 1500 m3 of water under a field. When using lava or grauwacke split, this will only be 750 m3,” says Glaap, while explaining his preference for plastic crates. Grauwacke has a porosity of 30 to 40%. Like lava, it is imported from quarries in Germany. While the long travelling distance affects the environmental footprint of the installation, the low water levels rivers like the Rhine are currently experiencing also mean that neither lava nor Grauwacke can be delivered this installation season. Crates are available in heights of at least 40 mm and the height can go up to 400 mm. Newae also used them in Schijndel, the Netherlands, to establish an irrigation buffer for irrigating the natural grass football fields underneath synthetic turf fields. “Here, we can temporarily store enough water to allow us keeping the five natural grass pitches sufficiently moist all year round,” he explains.

“The 1,200 m3 storage capacity per field is sufficient to irrigate the three synthetic turf water fields all year round”

According to Jan Coppens of Smits Veldhoven, a Dutch supplier of irrigation equipment, a natural grass football field in the Netherlands demands 200 m3 water per week during the season. “That means that you’ll have to calculate carefully how many fields you want to store water and what period you will be trying to bridge,” the irrigation expert says. Coppens advocates the use of exposed water buffers in the form of a covered basin or silo. “These will be big enough to store all water that is harvested on the field throughout the year. This way of buffering water is cheaper than buffering underneath a field, and the buffer capacity does not depend on the dimensions of the field.” All that is required is that the club has sufficient space to realise such a buffer.

Disconnecting from the sewage system

Thijs Averes of Gras Advies consultancy notes that buffering water underneath the field really depends on the location. “In Lelystad, we used a coarse gradation of lava rock to create a so-called Waber field. In this case, the 16-32 lava layer was 25 centimetres thick.” The use of lava was stipulated in the duty of care, as the synthetic turf football field uses SBR infill. “The lava will bind any metals that may leach from that granulate.” 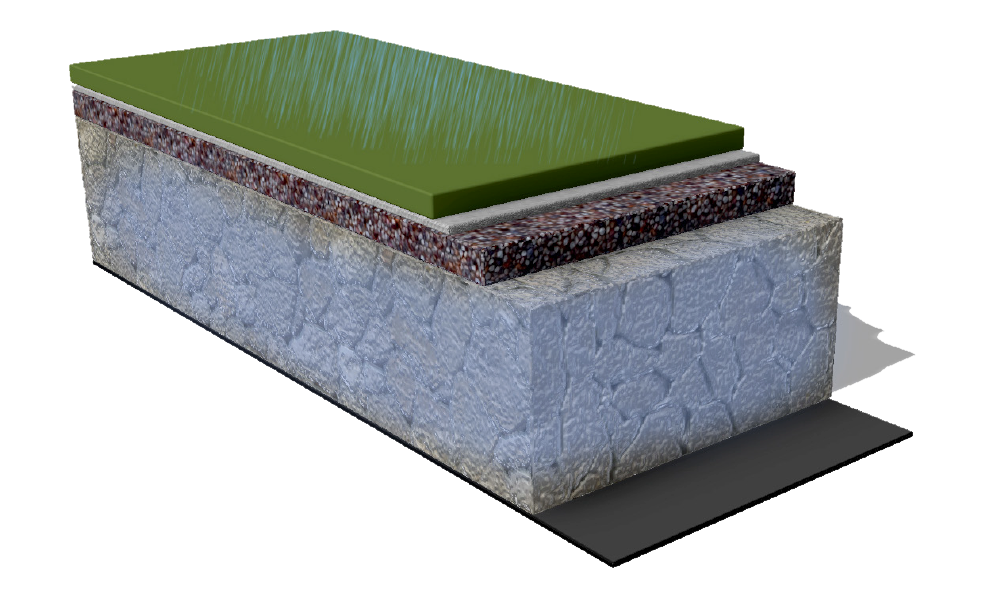 A Waber solution can temporarily store over 1,200 m3 of water. According to Averes, the investment costs about 100,000 euros extra compared to a traditional construction. “However, that extra investment will certainly help save money elsewhere. Just think of the costs for the construction or maintenance of the sewer system or the reduction of rainwater that no longer runs through inner-city areas, for example,” he notes. Gras Advies also used the concept in the city of Haarlem, where excess water from a nearby neighbourhood is absorbed in the Waber-system. As soon as the layer is saturated, the excess water is discharged into the surface water via an overflow. The downside of the concept is that the water quality must be carefully monitored because the water can become polluted by dirt from, for example, the street. “Our experience is that, in that case, the first few cubic metres quickly become dirty water because of oils that leak from cars on the street,” notes Glaap. Storing runoff water from roofs is also possible, but this also requires extra attention. “Due to the possible presence of bacteria from, for example, bird droppings, it demands attention from a hygiene point of view.”

Pumping it into the earth

In the city of Rotterdam, a consortium of the Municipality of Rotterdam, KWR Water and FieldFactors is experimenting with deep infiltration by pumping harvested water into freshwater pockets in the earth-layer. The water is harvested on the new stadium field of Sparta FC, from where it is collected in a helophyte filter before it is pumped into the earth-layer. Like Newae, ASC Sports & Water consultants are following the developments in Rotterdam with great interest. “It is a concept that is already frequently used by horticulturists in the Westland area,” says Robbin Van Arkel on behalf of ASC Sports & Water, referring to the area near the Hague where greenhouses are one of the reasons why the Netherlands is the world’s second biggest exporter of vegetables and fruits. All the rainwater that falls on and near the stadium (field) is purified by the helophyte filter throughout the year before being discharged to the freshwater bubble in the earth-layer underneath the city. In Rotterdam, these natural cavities appear at only 10 to 25 metres below the surface. “They can have a massive storage capacity. Therefore, they can bridge an entire drought period and provide water for different purposes throughout the year. An approach like this also replenishes groundwater shortages and improves groundwater quality, while at the same time restoring the water cycle,” Van Arkel explains. An additional advantage of this solution is that the existing soil underneath or near the field does not have to be disturbed, meaning that the number of truck movements is kept to an absolute minimum. That is why Van Arkel’s colleague, Piet Kranendonk, believes that the costs for such a system should be approached differently. “In my opinion, it is wrong to expect that the subbase for a synthetic turf field will last for at least 30 years. Such a claim makes the subbase too rigid and unnecessarily expensive. Sports field constructions should be granted more creative space when designing a field.” Kranendonk and Van Arkel expect that the solution that Rotterdam is currently using can be applied throughout almost the whole of the Netherlands, as well as in major parts of Europe. Especially sandy soils lend themselves perfectly to this application, they say.

Despite being hopeful, Van Arkel and Kranendonk point out that, to give deep infiltration a chance, Dutch policies and regulations will have to be adjusted. “At the moment, regulations are a hindrance to innovations like this,” says Kranendonk. According to him, no fewer than six laws were questioned during the development of the project in Rotterdam. That is why he believes that the promulgation of the new environmental law in the Netherlands later this year can be beneficial for deep infiltration. “Once the new law has been adopted, governments will have to enter into discussions at a much earlier stage. This will allow more stakeholders to join the table, and, as such, identify opportunities that serve a common purpose.”

The Compendium for the Living Environment (CLO), the Dutch government body that provides figures on environmental quality, changes in nature, and spatial development in the Netherlands, says average precipitation has increased by 26% over the past 110 years, from 692 mm in 1910 to 873 mm in 2019. This means that the 8,000 m2 of an average football field will experience approximately 7,000 m3 rainfall annually. “About 43% of this evaporates immediately because of the surface heat,” says Glaap. In addition, some water also disappears through natural infiltration. This is especially the case in sandy environments. That is why harvesting water on sports fields and storing it underneath the playing surface is a complex issue. Nevertheless, with the technology and ideas available and in use in different industries already, there is no reason why sports fields cannot be considered for harvesting water and storing it temporarily. All it needs is a club or municipality that is willing to look ahead or to think beyond common boundaries. Sports facilities not only serve the sport or community but can also alleviate the municipal sewerage system, while improving the sustainability of the municipality or even a whole society.