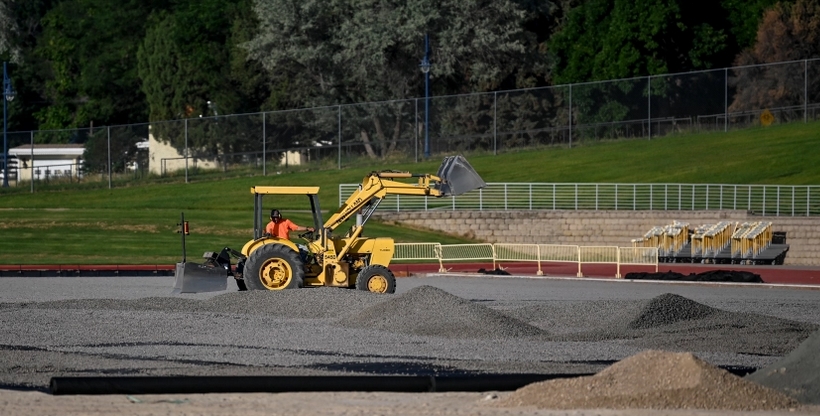 The University of Northern Colorado expects that its new synthetic turf field at Nottingham Field is expected to have significant time and financial impacts on the university.

According to Graham Nugent, UNC Athletics director of facilities and events, the university has received the necessary permits for the project. Ground has been broken already. The installation of the turf will take anytime from one week to three weeks, the university believes.

The new Ironturf field is expected to reduce the maintenance needs and won’t require water like natural grass.

“It’ll make it a lot easier on our side, because there’s less set up in terms of what needs to go down on the field,” Nugent said.

The facilities and event staff won’t have to paint the field — he says this saves days of work — and will worry less about protecting the track surface. Previously, certain mats had to be placed on the sideline due to concerns about the track.

Instead, UNC will mostly focus on ensuring the turf isn’t abused, there is no trash and any issues can get fixed quickly. The athletic department already has a tool to ensure the rubber infill pellets are spread evenly and the grass is fluffed.

“There will not be a hard part, because it’s a turf field, everything is already there,” Nugent said. “The main thing is just making sure it gets the proper TLC it needs.”

UNC Planning and Construction Department Project Manager Kevin Robinson doesn’t have exact details regarding the cost savings for water, because he does not know the exact fees. The university, however, expects to reduce its water usage by 8.7 million to 12 million liters per year. At the higher end, that’s enough water to serve about 20-30 homes.

Additionally, Robinson said the university will save 22 hours per game in layout labor and reduce mowing by roughly 90 hours annually.

UNC will save about USD1,350 per game in field paint costs and USD1,400 per year in grass treatment and fertilizer products.

“The installation of turf at Nottingham Field is just another step in the great support and investment in our student-athletes by our outstanding donors,” said UNC Athletic Director Darren Dunn when the upgrade was first announced. “With the new turf and ongoing construction of the Empower Center, our facilities continue to improve our student-athletes’ ability to succeed.”

This is the first major upgrade to Nottingham Field since 2015, when UNC installed a new video board above the south end zone. It is completely funded by donors.

Nugent said the turf installed on the practice fields isn’t what is being put in the stadium, but they both will feature rubber infill pellets. The rubber is designed to serve as a shock absorber to prevent injuries.

Synthetic turf has received criticism in the past for the alleged increased risk of injury, but reports have not come to a definitive conclusion. The Centers for Disease Control and Prevention also indicates the recycled rubber pellets are safe and do not release harmful levels of volatile organic compounds, which was flagged as a health concern.

Cal Poly remains the only Big Sky team to play on natural grass, but turf has not necessarily taken over. The use of grass and turf remain split among football programs.

Oklahoma, Alabama, Colorado, Texas A&M, LSU and Georgia are teams that still play on natural grass. Meanwhile, most of the Big Ten, Colorado State, Colorado School of Mines and Texas are among those that play on turf.

UNC’s first home game under head coach Ed McCaffrey is scheduled for Sept. 18 against Lamar. The Bears will play at CU Boulder on Sept. 3 and at Houston on Sept. 11.