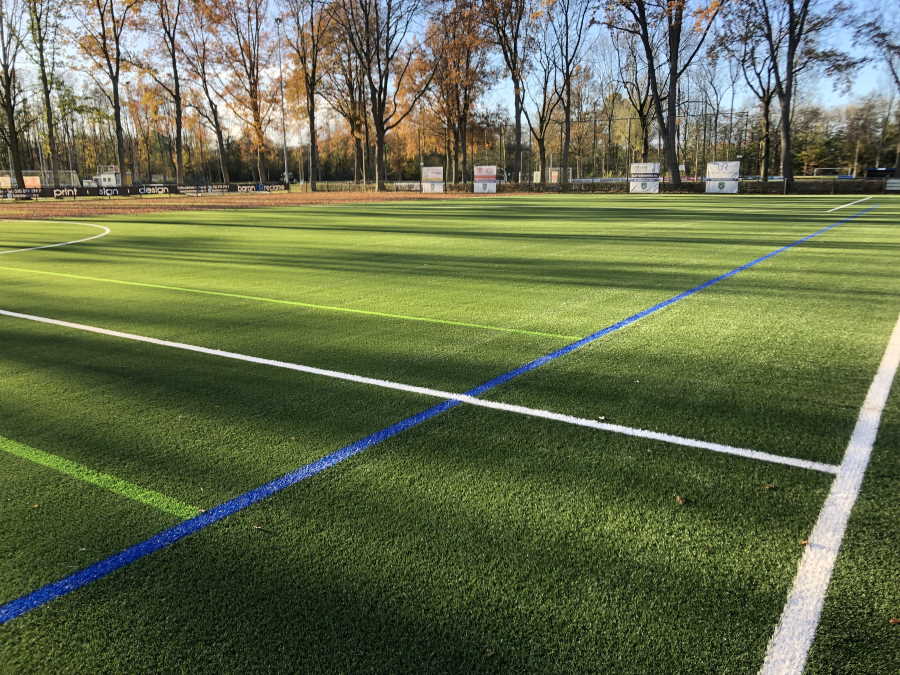 Utrecht municipality has taken ownership of a non-filled synthetic turf field made of oil that has been reclaimed through pyrolysis.

The numbers for the practice field at VVJ are impressive: 8,100 kg of plastic, the equivalent of 325,000 Coca-Cola one-litre bottles, was chemically recycled to reclaim enough oil for the production of the 5,000 sqm field. Furthermore, 17,500 kg of foam that originally was destined for landfill or incineration was used to produce the high-density shock pad. The choice for a non-filled surface also means that the City of Utrecht avoids having to add 40 tonnes of polymeric infill to the carpet.

The yarn for the field in Utrecht is fully made of oil that has been obtained through chemical recycling. “The technology is that new and complex that the available amount of oil this year was only enough to produce about eight synthetic turf pitches for the whole of Europe,” Arjan Knottnerus of Tarkett Sports explains. “Because the use of pyrolysis recovered oil is completely new, all our steps and claims are verified by the ISCC, which is an independent institute,” he emphasizes. “We work on the basis of a mass balance. Our customers receive a certificate confirming that we have followed the schedule as developed by the ISCC.”

The Tarkett Sports non-filled carpet is installed on a ProPlay shock pad and has a very open structure. “It has a pile-weight of 1.6 kg, which is significantly less than the 2.5 or 3 kg we have seen with other non-filled synthetic turf carpets,” Knottnerus points out. “In our view, it is not the volume that matters but the quality of the yarns used.” The carpet has a combination of texturized yarn and a diamond-shaped monofilament.

“We believe that the higher dtex for the yarn as well as its diamond shape add value to the durability of the yarn,” says Marcel Bouwmeester, the project leader and consultant for the City of Utrecht.

Instead of adding more yarn per sqm, Tarkett Sports prefer the use of sand to provide stability to the players. According to Bouwmeester, this makes sense.

“Due to the open construction of the carpet, the foot is more in the loose, somewhat coarser and one-topped stabilization sand that is at the bottom of the carpet. The combination of the open character and the characteristics of the sand deliver a bit more grip, something that is a major point of contention on non-infill pitches,” he explains.

In line with legislation

The City of Utrecht already has one non-filled field. However, the carpet used for this field was woven, while the one for VVJ was tufted. “The municipality of Utrecht wants to give players the opportunity to play on various non-infill fields because it has high expectations of the non-infill product,” Bouwmeester continues. It is the absence of infill that is particularly appealing. “This is in line with the preference expressed by the Dutch Ministry of Health, Welfare and Sport to no longer use infill in synthetic turf pitches. This is also in line with the possible restrictions that the European Union might impose on sports field managers following the advice of its European Chemical Agency (ECHA) to ban the sale of polymeric infills.”

With Schmitz Foam Products, the producers of the ProPlay shock pad, running a program to accept reclaimed shock pads from polyethylene once they have become obsolete, Bouwmeester foresees that even more CO2 emissions will be saved in the future.

“The municipality of Utrecht has a tailor-made agreement with Schmitz Foam Products that they will take the foam back free of charge as soon as we no longer use it. Only once the panels cannot be used in another sports or play application, they will recycle those ProPlay panels to produce foam products for other applications.”

Guy Oldenkotte is senior editor of sportsfields.info has been covering the outdoor sports flooring market and industry since 2003

Dutch stadiums encouraged to invest in grass or hybrid pitches