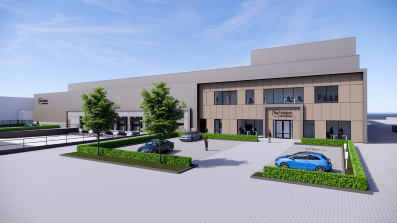 Re-Match has received the green light to start constructing a new synthetic turf recycling facility in the Netherlands. The Environmental Impact study has been well-received by the Dutch authorities, while Tiel municipality is keen to welcome the company.

The second Re-Match synthetic turf recycling plant will have double the capacity of its plant in Herning, Denmark. Furthermore, the new plant will be able to handle a wider range of synthetic turf carpets and is expected to achieve a higher separation result.

The new plant will be located in Tiel, the Netherlands. “Tiel is situated in the heart of the Netherlands. The city is close to the A2 and A15 highway corridors that link the southern with the northern and the western with the eastern sections of the country,” says Re-Match COO, Dr. Stefaan Florquin. The 8.800m2 facility will also be near the Amsterdam Rhine Canal, making it possible to reduce the number of vehicles required to transport discarded synthetic turf to, or clean and separated materials away from the facility. According to Florquin, Re-Match aims to source discarded synthetic turf within a 350 km radius of Tiel. “We currently comply with all international requirements to move waste material like discarded synthetic turf across the border to our plant in Denmark. As soon as the new plant is operational, we will be able to also apply for permits to move old turf from Belgium or Germany to the Netherlands.”

Re-Match refers to the new plant as being the blue print for plants projected in the US and France. “With a capacity of approximately 2 million square meters per year, or approximately 280 full-sized football fields, the plant in Tiel has double the capacity of what we currently have in Herning. Furthermore, all incoming material will be dried much earlier in the process. This will contribute to our capability of separating sand from the infill and fibres from the backing.” Re-Match claims that it will achieve 99.5% purity of sand and infill and 95% purity in separating carpet and backing. “All this without using water, chemicals or generating waste,” Florquin points out. The company has a patented recycling process that separates the various components of a synthetic turf carpet in a dry process.

The new plant will be fully powered by sustainably generated electricity and exhaust fumes will be filtered for NOx. “With the introduction of the zero nitrogen emission requirements by the Dutch government, the new plant had to meet standards that no company had to meet before. This was a huge challenge.” As all old carpets are sleeved before being transported to the Re-Match factory, Dr. Florquin anticipates it will require less energy to dry the delivered material before it is processed. “While some waste handlers can separate the sand from the rubber, this is not what represents the real environmental challenge of end-of-life artificial turf: it is instead the rubber and plastic fibres that are the main CO2 contributors. Separating out these materials is where the real benefit can be found, as just one artificial football pitch contains an amount of plastic fibre equivalent to 1.4 million plastic bags.”

The factory in Tiel will be followed by factories in the United States, France and the UK. “We are proud to announce the construction of the factory in Tiel,” says CEO Nikolaj Magne Larsen. The plant in France is projected to be in the north-eastern part of France with ground breaking expected mid 2022.

Placing municipalities in the driving seat

Re-Match anticipates that the construction of the plant will start end of summer and that the new recycling facility will be operational before the end of the year. “Once completed, we will place municipalities and owners of old synthetic turf fields fully in the driving seat. Every step in our process is documented and can be fully traced. We will soon launch an app that will enable our clients to immediately look up the processing status of a field they have handed in,” Dr. Florquin continues. “We anticipate that this transparency will become more important in the future when field owners will really want to know the status of the field they handed in and the materials that become available for re-use again.”