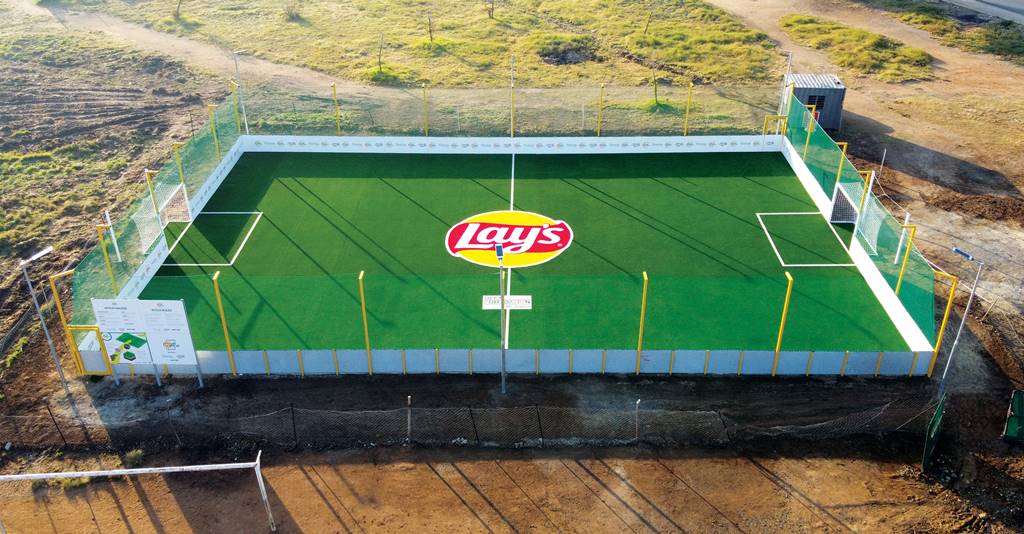 PepsiCo has announced, Lay’s RePlay, a new global initiative to bring joy to communities around the world through the power of football. The PepsiCo chips brand Lay’s has partnered with the UEFA Foundation for children and streetfootballworld to reuse empty chip packs to help create sustainable football pitches. GreenFields has been selected as the supplier of the pitches.

The empty packages will be converted to pellets used to produce an Ecocept shock absorbing layer. Ecocept is a concept developed by GreenFields parent company TenCate Grass, which converts waste to a solid, permeable layer that is used for producing a stable and comfortable subbase for a synthetic turf field. Until now, TenCate Grass has mainly been using discarded synthetic turf surfaces as raw material for the Ecocept layer.

It takes approximately three million chips packages to produce an Ecocept layer for this type of fields while such field will produced approximately 128 tonnes fewer greenhouse gas emissions.

PepsiCo says that up to five Lay’s RePlay football pitches are expected to open in 2021 around the world, with the first in Tembisa, South Africa, followed by communities in Russia, Brazil, Turkey, and the UK.

Supported by long-time global Lay’s ambassador and six-time Ballon d’Or winner, Lionel Messi shares, “I was lucky enough to start playing football at a young age and it transformed my life. Everyone deserves the chance to play and fall in love with the sport, and Lay’s RePlay is giving communities across the world that opportunity. I’m proud to give back through this project and excited about the impact it can have on the next generation.”

In partnership with GreenFields, empty Lay’s chip packets are collected from local waste and recycling partnerships and given a second life – shredded and converted into pellets that become part of the Ecocept base layer. The turf, a GreenFields MX NF non-infill pitch is developed for long-lasting, high-performance play. The pile of the pitch consists of resilient but soft to touch pile yarns in two different shapes and are combined with a voluminous air texturized thatch layer that replaces infill. GreenFields MX NF is made from one polymer family and can be recycled into high grade polymeric granules for new applications. At the end of its long life (approx. 20 years) Ecocept can be re-granulated and paved again to extend the life cycle of the system, for a truly circular solution. Beyond the turf, Lay’s has committed to adopt a carbon compensation strategy that will ensure all pitches deliver a net zero carbon footprint over their life spans of an estimated 10 years.

This global initiative and commitment by Lay’s has been verified by independent consultancy, Good Business, with an in-depth study finding that Lay’s RePlay pitches have a significantly lower environmental impact than alternative artificial pitches across several areas, including: reduced greenhouse gas emissions, microplastic pollution, recyclable material and turf, ecological disturbance, and water usage.