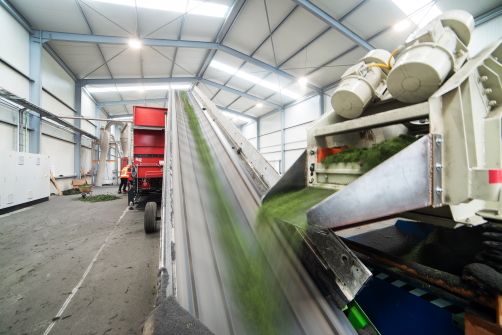 Within three years of concerns being raised over the large heaps of discarded synthetic turf dotting the Dutch countryside, the Netherlands now has a flourishing synthetic turf recycling industry. As the wheels have started to turn, the question is: who will be next to be handed the baton in the sustainability cycle for synthetic turf?

As the Netherlands was amongst the early adopters of third-generation synthetic turf at the start of the century, the country currently has one of the biggest synthetic turf field densities internationally. A 41,500 km2 country with a population of 17.7 million, the Netherlands has approximately 3,500 full-size synthetic turf sports fields for either football or hockey, several hundred synthetic turf tennis and padel courts, and a few hundred playgrounds finished with the surface. As a result, the volume of discarded synthetic turf has been growing steadily towards approximately 1.5 to 2 million square metres per year. For many years, clubs and municipalities didn’t care much about what happened to the old surface the moment it left their premises. This quickly changed in 2018, when media drew attention to the issue and the environmental problems they were causing.

The Dutch discarded synthetic turf landscape has changed drastically since the start of this year. Gone are the big heaps at TUF Recycling in Dongen, a company that failed to live up its promises and became the incarnated reflection of the problem. And the heaps at the site of GBN-AGR in Amsterdam, the showcase of dealing with discarded synthetic turf the Dutch way, are gone too. The stockpile had been accumulating over two years but was completely processed in the second half of 2020. “We will soon start processing the stock that is currently sitting in our site in Hoorn. By the time the synthetic turf installation season is in full swing again, likely in June, our site will be empty and ready to take on new stock,” says Eric van Roekel who heads GBN-AGR. The company is a joint-venture between TenCate Grass Group (GreenFields and CSC Sport), Sport & Leisure Group (Domo Sports Grass and Limonta Sport), Antea Sport (Edel Grass and J&E Sports) and Dutch recycling specialist GBN. Further south, Teun Wouters of Topgrass echoes similar sentiments. Together with contractor Gubbels he cleared the site of TUF Recycling. “We are in the process of obtaining permission to move the machines we used to clear the site in Dongen to a permanent location near Bergen op Zoom. Here we intend to start recycling synthetic turf from fall this year.” Wouters is banking on his close relationship with Tarkett Sports, the only major company that has a large footprint in the Netherlands but that didn’t join the GBN-AGR joint-venture, to start with. Some of the synthetic turf reclaimed by Wouters and his team has been handed to the Morton Extrusionstechnik GmbH factory in Germany, where it is used in the production of various components of Tarkett Sports synthetic turf system.

Teun Wouters calls the latest developments a blessing for the Dutch synthetic turf market and industry. “I think it really serves the market when there are at least two recycling companies offering their services.” However, should no new recycling plant materialize, van Roekel assures us that GBN-AGR has the capacity singlehandedly to process all synthetic turf that becomes available. “We have space to add a second line and we can also start working in shifts.”

Being put to good use

As the problem of recycling discarded synthetic turf in the correct manner has now been dealt with, the focus has shifted to what happens with the reclaimed material. According to FIFA, the various components for a standard third-generation synthetic turf system carry the following weight in the system:

The three recycling companies each use a different method to separate the various components.

The stabilizing sand is washed and sieved after which it is either feed back to the synthetic turf industry or moved to other industries for use for different purposes like sand-blasting. Van Roekel points out that the sand that leaves their premises meets all legislative requirements to be called ‘clean.’ Re-Match uses a dry patented separation process to obtain similar clean sand without producing contaminated sludge. Performance infill that the three recycling companies reclaim is also being made available to the synthetic turf industry first before it is offered to other industries. “We have an agreement with our neighbour Granuband that they can take the reclaimed SBR we are left with, to produce products like shock absorbing tiles for use in playgrounds,” van Roekel states. As natural infills like cork or coconut fibre were only introduced recently, the experience by the three companies in these materials is limited.

The biggest challenge is the primary and secondary backing as well as the synthetic turf yarn itself. Despite collectively only making up 8% of the system, the fact they are difficult to be used as a new raw material has become a major burden for the synthetic turf industry. Dutch companies Duvano and GreenMatter, a joint-venture between Lankhorst Recycling Products and W&H Sports, use the reclaimed yarn and backing to produce various products. “One old synthetic turf carpet supplies us enough raw material to produce infill containment barriers for five third-generation synthetic turf fields,” says William van Diemen of GreenMatter. “In addition, we can produce outdoor furniture, seats for grandstands, mats on which to brush your shoes, flower boxes, bicycle sheds, scaffolding boards and shore protection, to name a few.” This is another step up the Lansink’s Ladder following the introduction of the EcoCept permeable performance sports base introduced by the TenCate Grass Group a few years ago. The production of an EcoCept layer for one hockey field requires the material of at least three old synthetic turf hockey surfaces.

Re-Match is already working on the next step. In 2019 the company announced that it would participate in a trial to produce synthetic turf landscaping products from reclaimed synthetic turf. “We are doing this in cooperation with the Frauenhofer Institute from Germany and the first results are promising,” notes Florquin. “One of the things we have learnt is that the purity of the source material is key.” Extrusion equipment in particular is very sensitive to any polluting element in the source material. One grain of sand is enough to cause significant damage to the machine.

The Lansink’s Ladder, the internationally accepted fundament to the waste hierarchy concept, captures the progression of a material or product through successive stages of waste management, and represents the latter part of the life-cycle for each product. There are various ideas on how many steps are included, but the European waste hierarchy adopted by the European Union, identifies the following five steps:

One of the prerogatives to have this achieved is by including recycling companies or their activity the moment new product development commences. “That is why it will take approximately 10 to 15 years before we will be able to produce new synthetic turf for sports made of recycled turf,” says van Roekel. “The synthetic turf market for sports applications is highly regulated and products have to meet very tough requirements before they are accepted by the governing bodies. It takes time when you want to achieve this with reclaimed materials.”

For the time being, recycling companies rely on the market to adopt a holistic vision. “Together with testing institute SGS Intron, we are currently reviewing the options municipalities have to use reclaimed sand and infill,” Florquin points out. The stringent requirements imposed by Dutch legislation make municipalities reluctant to consider the use of these materials.

The three main Dutch cities have already adopted their own approach towards reducing waste from synthetic turf systems and reusing components in the new synthetic surfaces. The City of Amsterdam has decided to only use reclaimed sand as a stabilizing material in new synthetic turf pitches. In a tender issued in 2018, Rotterdam Municipality made it a prerogative for tendering companies to prove how they would reduce the environmental impact of the approximately 90 synthetic turf fields that were to be renovated during the four years the contract would be valid, and how reclaimed materials would be re-introduced. Utrecht Municipality views things differently. “The responsibility to recycle goes across all departments. It is important that each department knows what material or items they have that can be recycled or deployed elsewhere,” project leader and consultant Marcel Bouwmeester says. “We are trying to encourage the other departments to buy into the idea of using shore protection made of old synthetic turf over buying brand materials. It is a mindset that needs to change, but it is inevitable to do so when the city wants to meet the goals it has set in terms of sustainability.”

There is certainly still a long way to go before the burden synthetic turf has created on our waste stream is lifted. However, the world is slowly but surely seeing a variety of new initiatives to deal with end of life synthetic turf. For these to really succeed it will be important that the entire value chain works together on the issue and that the market is willing to look at synthetic turf systems holistically as well as how they will re-introduce reclaimed materials.

This article was commissioned by Fieldmanager Magazine from the Netherlands