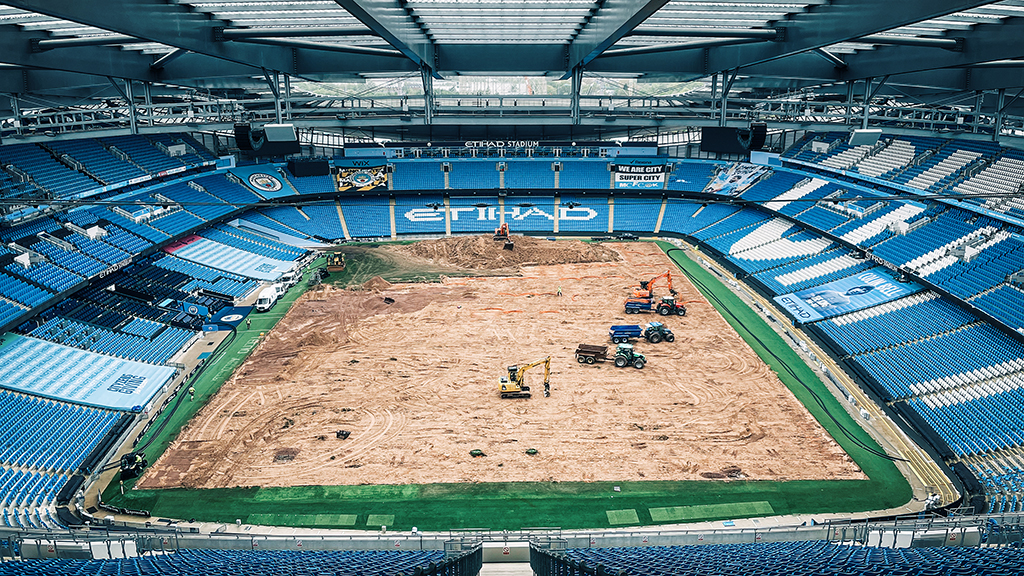 The home of the Premier League Champions is undergoing its first major revamp since 2003, when the stadium was inaugurated.

The new build will include an air vacuum system for the first time which can pull moisture out of the pitch against the force of gravity.

It also has the ability to retain and recycle over 200,000 litres of rain and pitch irrigation water – a first in the UK for this type of pitch drainage system.

Once completed, the pitch will be reinforced with SIS Grass for the first time, and installed by SIS Pitches. The SIS Grass hybrid solutions is just one of the hybrid systems I discussed in this article.

Excavation saw the pitch level dropped by almost half a metre, removing around 6,000 tonnes of rootzone, sand, gravel and clay. This will be fully replaced and the new pitch will sit at exactly the same level as the previous one.

Principle contractors are John Mallinsons from Ormskirk, who did the original build in 2003 (as well as the pitches at the City Football Academy), working with Irrigation Control and SEL Environmental and independently monitored during the pitch build by PSD Labosport – all three are north-west based.

This is the first full rebuild of the pitch since 2003 when City moved to the Etihad, although a partial rebuild took place in 2010. The project is the biggest single pitch project in the Club’s history.

The new pitch will be completed by late June, giving seven weeks to establish.

Works were originally planned for summer 2020 but were delayed due to the COVID-19 pandemic and uncertainty around when the 2020/21 season would restart.