Amorim Sports builds on the proven benefits of cork 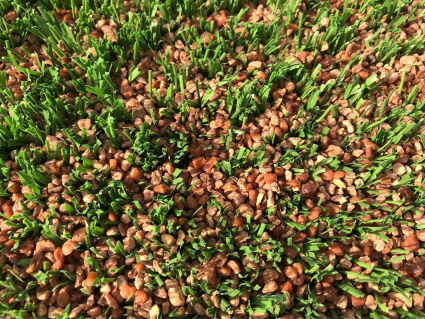 The latest Amorim Sports infill solutions based on cork are a mixture of cork with olive pits, as well as a cork vulcanised with a natural rubber. These latest developments show the true strength of Amorim Sports. R&D director Eduardo Soares describes the benefits that both blends of 100% natural materials offer.

It’s natural that the bar is raised immediately as soon as something has proven to be a success. This also applies to Amorim Sports. As cork infill has become the norm for third-generation artificial turf fields, cork is studied more robust to further improve the performance of this type of field. Amorim Sports has found the next level solution by introducing a mixture of cork with olive pits, as well as cork vulcanised with a natural rubber. “Vulcanising cork with natural rubber is one of our areas of expertise,” Soares explains. “We’ve been doing that for other industries for years already. Due to the high expectations regarding the performance of infill in artificial turf fields, it took some extra time to adjust our process to also produce for use in artificial turf sports fields. We also had to obtain the proof that backs up our claims.”

Amorim has been the market leader in cork applications for years. The company also has much experience in combining the advantages of both cork and natural rubber. Until recently, these products were used solely to limit noise nuisance or vibration. Floors, bridges and engine gaskets are the biggest beneficiaries of these products. Amorim Sports believes it also adds value to artificial turf for sports. “The elasticity of natural rubber is higher than that of cork. We use a minimal amount of rubber to combine that elasticity with the biomechanical benefits that cork offers. The result is an infill grain with a high elasticity that helps the synthetic turf fibres to stay upright,” explains Soares The cork grain and liquid rubber juice are mixed before being heated, after which, this is ground into granules. Various tests prove the great shock absorption and impact attenuation they deliver. An artificial turf field that uses this infill is, therefore, less reliant on the shockpad to deliver a safe and comfortable surface. “It is an ideal infill for use in artificial turf systems for which the use of a minimal amount of infill is preferred. This infill was also developed to have a specific gravity higher than one, meaning it will not float. Therefore, our Amorim Hybrid infill also responds to concerns raised over infill floating after heavy rains. That will certainly no longer be the case,” Soares affirms.

The second new addition is a mixture of cork with olive pits. “The cork provides the necessary elasticity, while the olive pits provide the necessary stability,” notes Soares. “Research has shown that the cork in this mixture experiences less wear than a 100% cork infill experiences. Furthermore, by adding the differently shaped and harder olive pits, the likelihood of compaction is reduced, as the olive pits prevent the cork grains from entangling.” Amorim Sports offers three different mixture ratios, with the ratio of cork in each increasing. “Typically we would advise the use of a minimum of 15 mm performance infill. But, depending, on the other system components, like a shock pad or the density of the turf, that may vary.”

Both the Amorim Sports Organic 201 to Organic 203 mixtures of cork with olive pits, as well as the Amorim Hybrid infill, where cork has been vulcanised with natural rubber, have been extensively tested by test institute Labosport. “This infill is fully characterised and compliant in an external validation lab for aging tests, such as resistance to agglomeration, cracking and UV, toxicology, and others. Higher amounts of cork on the infill system showed consistently better values of force reduction. The energy restitution and vertical deformation was improved to an extent by the increase in cork but comes to a limit due to the compressibility limit of the cork. In terms of elastic energy, higher amounts of cork increased the returned energy,” observes Soares.

The infills have also been tested for compliance with REACH. “The infill was tested several times against the presence of heavy metals, including after leaching, PAHs and EOX. The results are all in compliance with international standards, so we can rest assured about the absence of these elements.” This is possible thanks to the special method Amorim Sports uses to vulcanise the infill. “The cross-linking uses a technology with no heavy metals associated. The formulation was developed to use the very lowest amount of rubber needed to reach the performance levels we expect. This was possible due to the natural behaviour and biomechanics of cork, which in this case are perfectly complemented with the addition of natural rubber.” The biodegradability of the hybrid infill was tested at an American university. As Soares explans, “The cross-linking uses a technology with no heavy metals associated with it, and the biodegradation tests made, according to ASTM d5511 show excellent commitment, with biodegradation over a reasonably good period of time, allowing the use of an infill with good durability and overcoming concerns with the microplastics ban in Europe. The residues released over time by the action of bacteria on the soil are CO2, H2O and humus.”

One of the greater advantages of cork is that it retains moisture where it is needed and that it releases slowly. This makes cork an ideal infill to cool artificial grass pitches naturally. “Temperatures on an artificial turf pitch easily scale up to 40 or 50ºC in summer. Cork absorbs or adsorbs water from regular watering of the pitch and from the atmosphere’s natural moisture level. During the day, the water evaporation contributes to keep the pitch cooler and easier to use and to play,” Soares notes. Even the Hybrid variant can contribute to the natural cooling of a field. “According to internal testing, the Hybrid infill has shown to have a lower water absorption than a 100% cork infill but still higher than SBR rubber, which may be able to transmit a valuable cooling effect to the field without compromising performance in colder geographies.”

Soares points out that both the Hybrid Infill and the Organic Infill are in line with the European Commission’s aim for a more sustainable society and future. “Both blends contain 100% natural materials that are biodegradable. Using cork infill for third generation artificial turf fields will save you the headache of microplastic pollution from polymeric infill and will deliver a better performing surface.”

Evolution of high quality shock pad is ahead of its time

The continuous ProPlay loop of giving foam a purpose

Towards a climate-smart synthetic turf